Transfigured Night (Verklärte Nacht) by Arnold Schoenberg (1874-1951), was composed in 1899, during his first period when he was much influenced by Mahler. The work also contains echoes of Wagner, with some harmonic progressions and melodic lines strongly evoking his opera Tristan und Isolde.

The piano trio version of Verklärte Nacht was made by the pianist and protégé of Schoenberg, Eduard Steuermann, with the blessing of the composer.

It retains all the brightness and lushness of texture of the original string sextet version.

The poetic trigger for this musical work was the poem of the same title, written by the German poet Richard Dehmel. It speaks of the transformative powers of love and forgiveness, which also form part of the message of the birth and life of Jesus.

Specifically, the poem describes a nocturnal scene where a couple walks in a cold and inhospitable landscape. The woman says she is expecting a child by another man. The man walking at her side praises the virtues of motherhood and assures her that he is willing to accept the child as his own.

They continue to walk under the moonlight, the mood now happy and bathed in the radiant light of a “Transfigured Night ».

Two people are walking through a bare, cold wood;

the moon keeps pace with them and draws their gaze.

The moon moves along above tall oak trees,

there is no wisp of cloud to obscure the radiance

to which the black, jagged tips reach up.

“I am carrying a child, and not by you.

I am walking here with you in a state of sin.

I have offended grievously against myself.

I despaired of happiness,

and yet I still felt a grievous longing

for life’s fullness, for a mother’s joys

and duties; and so I sinned,

and so I yielded, shuddering, my sex

to the embrace of a stranger,

and even thought myself blessed.

Now life has taken its revenge,

She walks on, stumbling.

She looks up; the moon keeps pace.

Her dark gaze drowns in light.

“Do not let the child you have conceived

be a burden on your soul.

Look, how brightly the universe shines!

Splendour falls on everything around,

you are voyaging with me on a cold sea,

but there is the glow of an inner warmth

from you in me, from me in you.

That warmth will transfigure the stranger’s child,

and you bear it me, begot by me.

You have transfused me with splendour,

you have made a child of me.”

He puts an arm about her strong hips.

Their breath embraces in the air.

Two people walk on through the high, bright night. 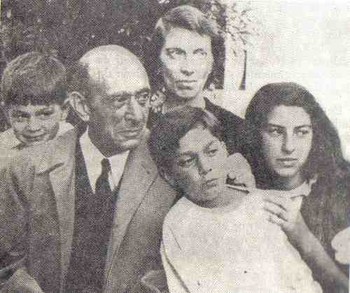 Schoenberg with his family 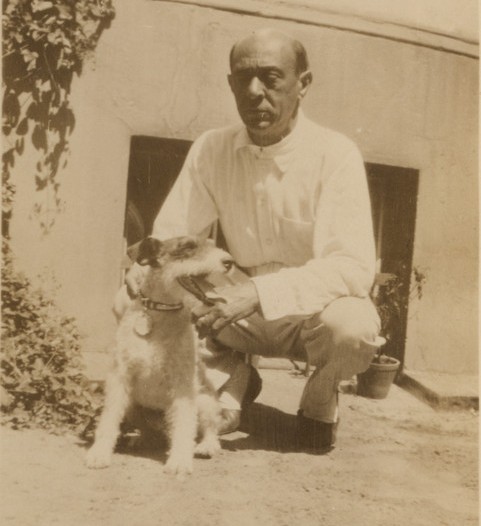 Schoenberg and his dog

The Christmas Tree by Liszt

When we think of the pianist and composer Franz Liszt (1811-1886), we do not spontaneously think of Christmas.

A seducer, a man larger than life, egocentric and even demonic, he bewitched the world by the dazzling virtuosity of his playing and his highly original and colorful compositions which even today exert a considerable influence on film music.

He was also engaged, alongside Wagner and Berlioz, in a historic struggle to determine what would be the music of the future. Their vision was of a union between music and drama through a revolution in musical forms.

They rejected the pre-established genres such as the sonata and the symphony. Wagner even spoke of a « total art work » (Gesamtkunstwerk). Indeed it can be said that the legendary interdisciplinary creations of the Ballets Russes in the early 20th century, such as Stravinsky’s Rite of Spring and Ravel’s Daphnis et Chloé, grew directly out of this movement.

In The Christmas Tree for piano, Liszt shows us a side of his character that we rarely see: naive, innocent, real children’s music.

In this work we are indeed far from the devilish virtuosity and heroic passion usually associated with the Lisztean persona.